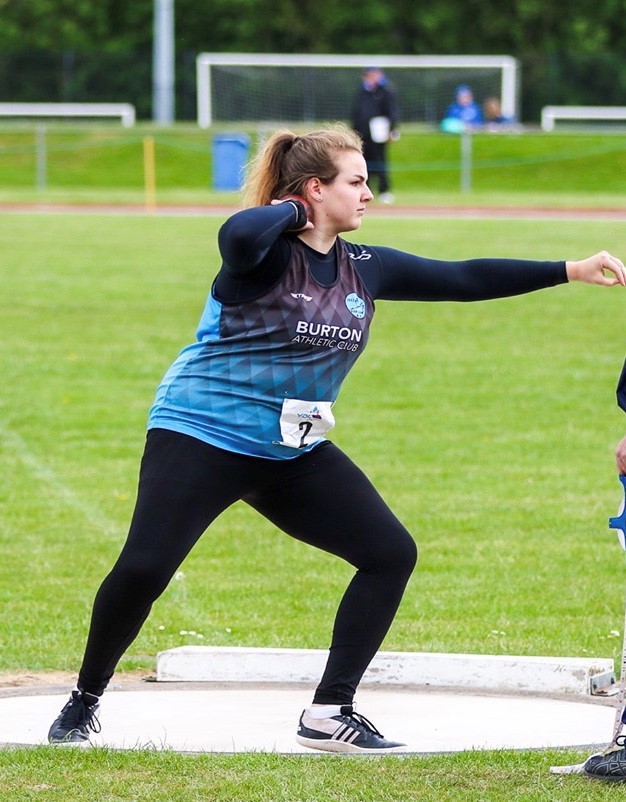 Burton Ac senior athletes kicked off their season in the Midlands division 4 men and women’s league with a home match at Shobnall. With strong teams from Charnwood, Newport and Tipton in the league , They were looking to make home advantage count and they did just that , finishing in a fantastic Third place despite a depleted women’s team.

With the Women’s team short on numbers, A heavy reliance was placed on the field events to pick up the valuable points.

First up was Mia sherriff who took 4th Place in the Hammer throwing 30.90m

Zara Acton was the star performer in the women’s team taking maximum points in her two events, in the Shot she took 1st with a distance of 10.31m, She also blew away the field in the discus taking 1st Place with a distance of 34.64m and breaking Diane Wortleys Long standing club record from 1985.

Francesca Sharpe Continued her dominance in the javelin moving up to a senior weight javelin taking 1st place with a distance of 33.77m, in the 100m she took 6th Place.

Wendy Sharrett produced a masterclass and rolled back the years by taking 1st in the 1500m with a time of 05:09.8, Taking 9 seconds off her club Vet45 record.

Anette Webster took 3rd Place in the Javelin throwing 20.85m and then took 5th place in the shot.

Harry Handsaker set a blistering time in the 100m and took 2nd with a time 11.3s.

Steve Hollis took 2nd place in the (B) Javelin with a season best of 28.95m

4 x 100m relay team of Handsaker, Sheffield, Obrien and Humphries took first place with a time of 46s , missing out on the club record by 0.10s

Over in boston at the north of England League match , Aimee Fellows Took 1st in the B discus with a seasons best of 31.78m, In the Shot she took 1st in the b with 8.81m and in the hammer she took 2nd in the B.